Just a little add on from my last post .... There was a funny story attached to the big red sandhill that I didn't mention.  The sandhill is just out from a little, sleepy, quite remote, Queensland town called Windorah. Mum, Dad and Harri have been there several times as they really love it. When there they always make the drive out into the desert country and that sandhill in particular. They NEVER see another car on the drive out or another person or much of anything for that matter. The last time they were there Windorah appeared to be the sleepy little town they knew and loved and they headed out to the sandhill. It was a full moon and they thought it would be VERY beautiful to watch the moon rise from atop the hill. They did have a very nice bottle of wine for Dad, a thermos of tea for Mum and cheese and biccies and their three big green chairs (one's Harri's .... can't have him being left out) so they felt they were all set. They had just left Windorah when they spotted a few cars pulled over on the side of the road. Most unusual Mum and Dad thought. As they approached the cars a Police Officer stepped out and waved them down. Crikey .... a breathalyser unit ... WTW!!!!!!!  OUT HERE!  Lucky Dad hadn't been drinking but he sure as anything intended on doing his best to empty that bottle of wine once settled on his big red sandhill. Would they be there when they were heading back???? AND why were they there?? There were 3 police cars and heaps of Police officers. Well Dad being Dad, had to ask. The Police Officer turned out to be a very nice bloke and Dad had a real good yarn with him. Told him about the bottle of wine and his intentions of sitting and enjoying it and the moon rise with his best Sheila and his best mate. He's a bit of a funny bloke my Dad and he had that cop laughing fit to kill. Turned out that Birdsville (a VERY remote outback town) had just held their annual picnic races and the people returning from there were due to hit Windorah at any moment. The cops were ready for them!!!!!! Too funny ..... bet they caught a few too.
Anyway Mum and Dad watched the moon rise ... Dad knocked over pretty much all of the wine and on the way back to town, again saw the Police ... Crikey .... they were still there!!!! Should have let Mum drive, aye??? All was well ... the VERY nice cop recognised our car and just waved Dad on. Crikey did Mum ever give a BIG sigh of relief that night. When they got back to town there were people everywhere. All the pubs were full, there was music blaring from everywhere and a two-up game was in full swing in the middle of the road just outside the most popular pub. There were 4 wheel drive vehicles everywhere and they were ALL filthy. Red bull dust covered every single one of them. Mum and Dad wondered where they were all going to be spending the night as there's not much accommodation in Windorah. They found out the next morning .... they went for their early morning bird watching jaunt down by the river and there was No bird watching that morning.There were bodies everywhere. Apparently down by the river is the BEST place to camp. Who knew?????
Funny .... they ALL left that next day and Windorah settled down to be the quiet little outback town Mum, Dad and Harri loved so much. All the police officers left too. Off to the next town to set up their breathalyser unit before the Birdsville picnic race mob arrived. 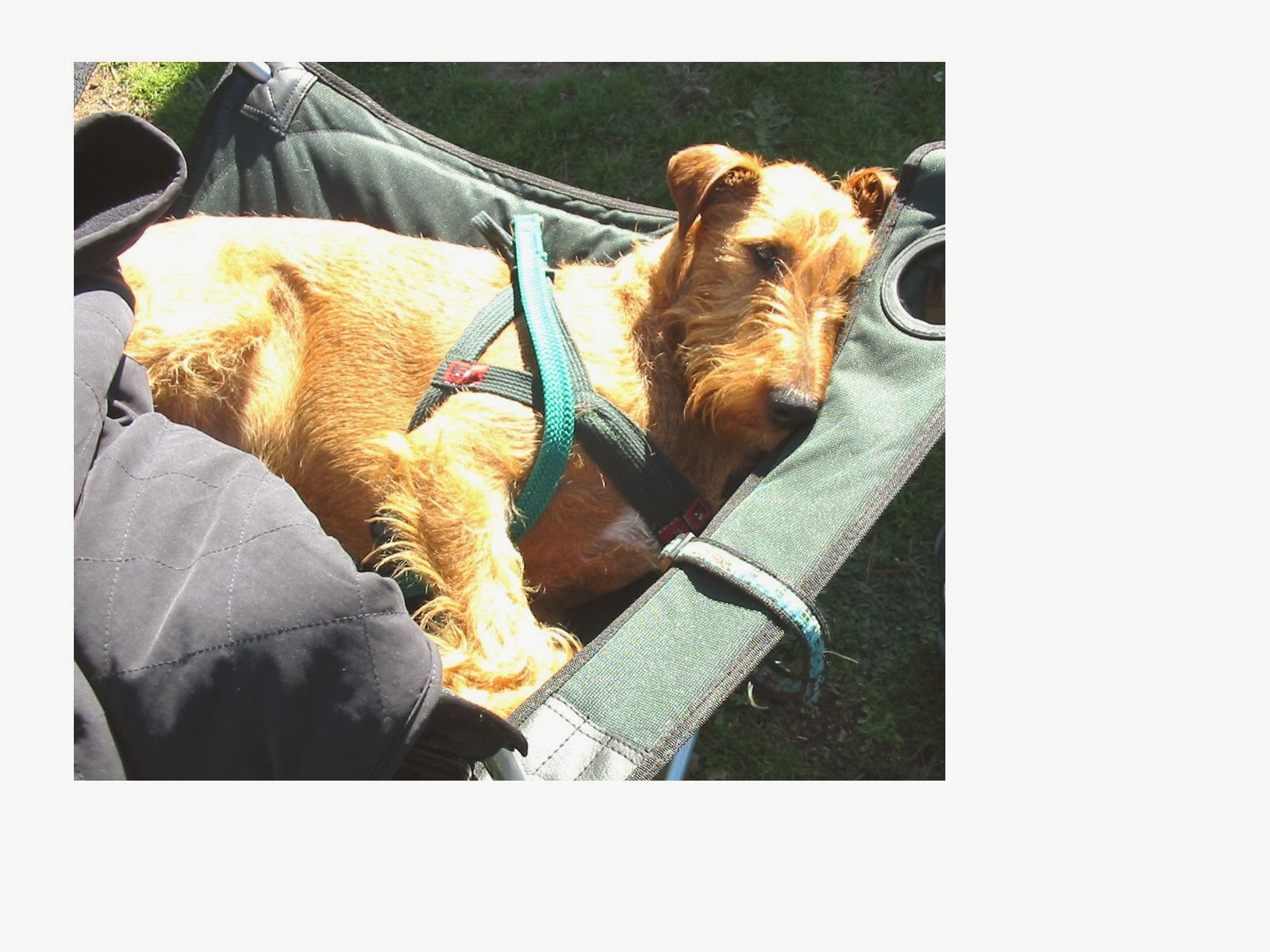 Harri in his green chair. This was taken at a flyball competition not at Windorah.
He was plum tuckered out from all that running. He ran really well that day and his team won the competition. They didn't win VERY often.  His team did flyball for fun that's why Mum joined up. Most of the teams consisted of border collies and kelpies. They are FAST and obedient. I'm fast but Mum doesn't think I would be VERY obedient at flyball. Harri's team consisted of ... wait for it ... Harri (irish terrer), Lucy (wire haired foxie), Ebon (toy poodle), Roonah (Irish water spaniel), Oscar (Jack Russell terrier), Butch (a VERY big, dopey and VERY loveable Doberman) and Rosie (who knew what Rosie was!!). No wonder they didn't win much. Quite a combination and not a border collie to be seen. Mind you EVERYONE loved them. They were  ALWAYS the comic attraction


Posted by Charliedownunder at 15:45