Do you remember my last post??  Miss G's first day at school!!!  Mara really liked the blackboard idea and wanted to see the little girls previous answers to what they wanted to be when they grow up. So here they are. I'll let the pictures tell the story but I'll make Mum put a photo of me up as well. Wouldn't want you to forget what I look like, aye??  After all ..... IT IS MY BLOG!!!!!!!!!!

Crikey ..... Mum and our Jen are in mourning.  You'll never guess who started at BIG school this year.  Miss G!!!!!  How bad is that??  She's not even 5. Just 4 and a half and the youngest in her class. She's the baby of the family. Mum's baby, Jen's, baby!!!  Does that make sense??  She's Jen's baby and Jen is Mum's baby. Now it makes sense, aye??  Miss G is Mum's youngest grandchild. We all expected dramas but ..... would you believe ...  Miss G was great. Mum and Jen .... not so much!!!  Now, all the little girls are at the same school.  That poor school will never be the same again.  Miss G was VERY excited and was up at the crack of dawn and was dressed and ready to go hours before she needed to be. Wanna hear a funny story about that first day??  Of course you do.  But first I must tell you that both Jo and Miss Izzi put on dreadful performances on their first day.  Jo is good now but Izzi still throws a tantrum from time to time and when Izzi throws a tantrum EVERYONE knows about it.  So ...... we didn't have high hopes for Miss G, but, would you believe, it all started out perfectly.  Walked into the school with her sisters like a real big girl.  Dropped Jo at her classroom ... no worries.  Dropped Izzi at her classroom ... a bit difficult but not too bad.  Got to G's classroom where her Mum was allowed to stay until the bell rang. When the bell went the Mum's had been instructed to tell their children it was time for them to say good bye and the children were to sit on the mat.  Well Miss G was having none of that.  She turned to her Mum and said "ok Mum .... you can go BUT I'M NOT SITTING ON THAT MAT".  All the other kids were sitting like little angels.  Hmmmmmph!!  You'd think just one of the three would go off like a normal, compliant child, aye?? Not in this family it seems.  Our Jen handed Miss G over to the Teacher and the last Jen saw was all the little kids sitting on the mat and Miss G standing, hand in hand, with her Teacher.  Oh dear!!!!!

Crikey is this brave or what?????  Mum and Dad went to the zoo in Canberra and they patted a Cheetah.  It was a few years ago now but my best feline friend, forever, Madi told us all about the Cheetah in her endangered series post and I said I would show her the photos of Mum and Dad patting a cheetah so here they are. Mum was dead scared.  The zoo keeper told them not to pat below their neck as they LOVED having their head and ears played with but HATED WITH A PASSION being touched elsewhere. So Dad, who's not good at listening or following rules, was patting away and, as he usually does, kept getting over enthused and his hand was getting lower and lower down the cheetah's back.  Mum thought that cheetah was going to freak out and give Dad what for but thank goodness he didn't seem to mind and just lay there like a good.  Pretty neat, aye?? 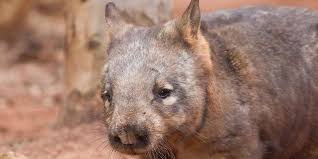 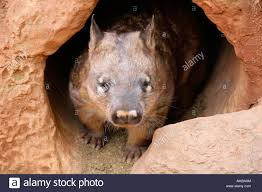 Crikey ...... My Mum's a bit of a drongo sometimes.  Here's what happened the other day.
We were heading off for a bit of a walk around the block and when we opened the door there was a little white fluffy pup in our yard. When she saw us she raced over and jumped all over us. Now I wasn't too impressed.  I thought I was going to be stuck with her like I'm stuck with Herbie but thank goodness that didn't happen.   Mum took one look at the little ball of fluff and immediately picked it up and called it by name, Flossie!!  After she scolded it for running away from home and crossing roads etc. etc. etc. we continued on our walk with Flossie in tow. We came to a house that Mum knew was Flossie's house. The owners weren't home so Mum put Flossie in the yard and secured the gate and left her there thinking she had done her good deed for the day. We then continued on with our walk before finally heading home.
Later that afternoon there was a knock on the door and when Mum answered it she was surprised to find a distressed young girl asking her if she had seen a little white puppy wandering around. Yep you guessed it.  The dog Mum put in Flossie's yard wasn't Flossie but a Flossie look alike. Off she and the young girl went and when they got to Flossie's house there were two little white fluffies having a great time together and one very puzzled looking Flossie owner. She had just returned from her outing and was very surprised to find another dog in her yard. Too funny, aye?  It could only happen to MY Mum!!

Look what I got for Christmas!! 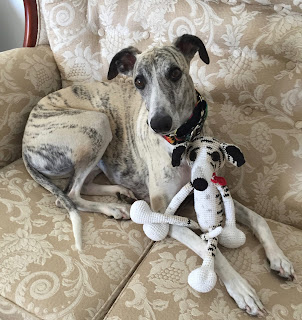 It's me only little. I love it and so does Mum. The nicest lady in the whole wide world made him for me. Her name is Anita Breznik and she lives a long way away in Slovenia. She will make one for you too if you would like. All you have to do is ask. She lives on the book of Faces if you want to find her.  She goes to so much trouble to make sure it looks just like you and she is so nice. She has a beautiful whippet girl called Nuba. Crikey she's beautiful. Anita has sent me lots of photos of Nuba. I think I'm in love.
Crikey .... don't tell Enid!!  Although she's not around much these days. I think she's forgotten me.

My mini me is going to take pride of place in our lounge room with Mum's teddy. I will be allowed to play with him because I'm very good with my toys and don't destuff them but ... only on VERY special ocassions to have my photo taken. Fair enough really. I don't think he likes baths too much and I wouldn't want to get him dirty. I can be a bit sloppy! Thank you so much Anita ..... I love him!! 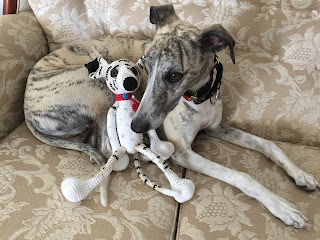 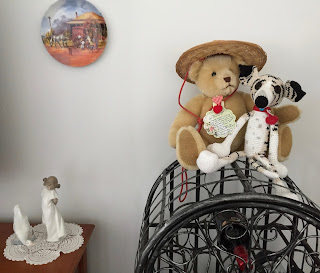