The worst day of my life!

I've just had the worst day of my life. What a nightmare! I got up this morning and went outside to do you know what. Crikey ...... I didn't stay out there for long. Fair dinkum it WAS horrendous!!It was blowing a gale and it was only 6am and it was FREEZING! I couldn't believe it could get THAT cold. I got back inside quick smart. That didn't last long .... before I knew what hit me Mum packed me into the car and we headed of to the Celtic festival in Glen Innes. We had to drive for about 40 minutes to get there. It rained!!!! The rain was so cold it was all slushy and icy! OMD! Do they want me to go outside in that. Apparently they do!!

We got to the festival and Mum tried to walk me around to have a look at things but I wasn't having any of that. It had stopped raining but it hadn't stopped blowing.  I drove her crazy. I was jumping all over the place and trying to rub myself into her legs. Well ......  you would too! How else was I supposed to get warm? I had my big warm whippet coat on and my raincoat over the top of that and I was still cold. You cant LIVE in those kind of temperatures. I could have DIED!! There were sheep dog trials on and Mum wanted to watch those. Crikey .... madness!! I didn't even want to stop and smell the sheep's butts. Mum finally gave up and headed into the main tent with Dad to watch the entertainment. It was a bit warmer in there and Dad did put my mat down for me and I did have my blankie. Ahhhhhhhhhhhhh!  Heaven!!!! I snuggled up into a little ball and all was right with my world. Some people were up on the stage spruking some sort of garbage. Poetry, Mum said. If this was the Celtic festival then, just maybe, it would be ok.   Hmmmmmmph!! That didn't last long. The Poets' left and all these blokes, dressed in kilts, made their way up onto the stage and OMD ..... the noise that came out of them was DEAFENING!! Not only did they have guitars, squeeze boxes and fiddles but they had bagpipes. BAGPIPES!! Fair dinkum ..... you couldn't hear yourself think.  I curled up into an even smaller ball and got my head as far under my blankie as I could, trying to get away from all that noise, but it was still a million decibels louder than it should have been. I would have bolted but I knew if I did I'd freeze to death so I just had to put up with it, aye?? This went on ALL day!!  Those bagpipes ...... what to say??  Those Scots have a bit of a problem, I reckon, if they think that's music. Fair dinkum ...... very unattractive instrument! Mum and Dad loved it. Crikey ..... and I thought they had good taste. After all they did chose ME!! We were there all day. Like from 9am to 3.30pm. Oh My Head!!!!!!! Mum took me outside twice for a walk but I was having none of that. Pulled and pulled until she took me back into that tent so I could curl up under my blankie again. The noise was intolerable but at least I'd only go deaf. If I stayed outside I'd freeze to death. 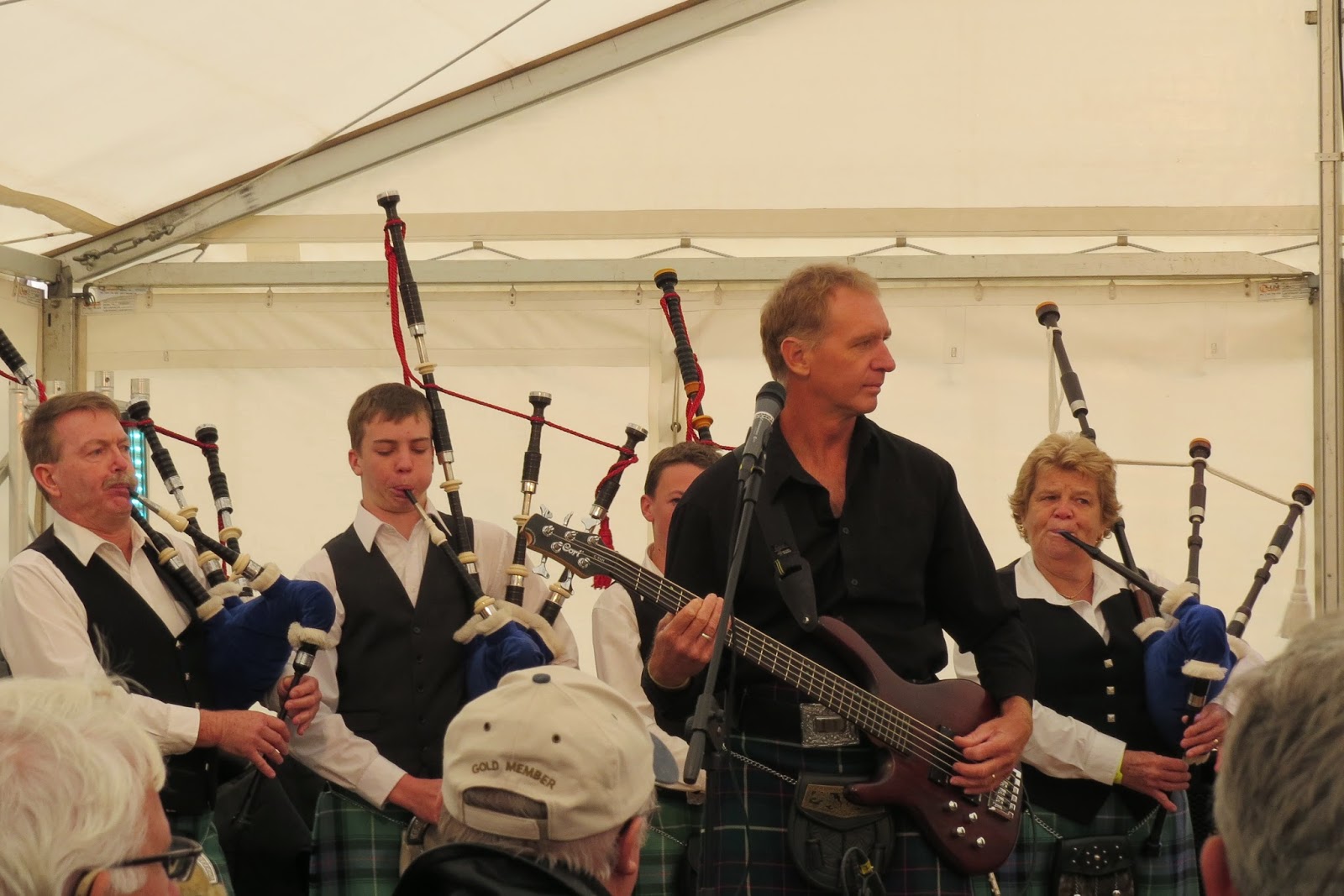 We finally left and did the big drive back to our cottage. We went via the local dog park so I could have a bit of fun on the worst day of my life but there were NO dogs there.  I could have told Mum and Dad that. No one else would be mad enough to take a bloke out in that sort of weather.  I did run around a bit and then Mum walked me back to the cottage while Dad drove home. What's with Mum and her walking? I wanted to go with Dad but no...... I had to suffer some more on this perfectly horrid day! What a nightmare. I'm back in the cottage now. In front of the fire and here I'm going to stay. It's quiet!!!!!

The weather people reckon it's going to snow tomorrow. Crikey ..... I hope they are wrong!!