Sydney Royal and other stuff!!


What a Nightmare!!!!!!  Talk about rain ….. will it EVER stop?  We spent a whole week in Sydney and although it wasn’t raining ALL the time it did rain every single day.  We stayed in a very nice little cottage in Sydney.  It was only tiny but it had a bit of a yard for me to pwivacy pwease in and it did have a very nice view of the back side of the Sydney Harbour Bridge and the city. When you could see it from the rain that was!

We walked around the neighbourhood a lot.  There was a very noisy schnauzer that gave me a hard time every day.  Every time we walked past his house he would go crazy. He would run along the fence line barking fit to kill and then he would appear and stand on this pillar thing near his gate and bark and bark at me. I took NO notice. That soon shut him up but crikey ….. what a performance!  I know he’s probably on security duty like Zoe but fair dinkum ….. is all that noise REALLY necessary.   After all I’m not one of Whitley’s zombiez.  Now they need a good barking at but not little old me.  I’m harmless!

Mum took me to the cemetery dog park twice a day. We tried to do it between showers but we ALWAYS managed to get wet at some stage or another. We visited a few other dog parks too. I reckon we found the BEST dog park in the WHOLE world. It’s on the harbour and it’s soooooooo good. Heaps of dogs and there’s lots of grass to run on AND there’s sand and water to swim in and it is sooooo much fun. It even stopped raining for a whole hour and we stayed there for that whole hour too. Mum and Dad got talking to a lovely couple from Oregon, US  who were over here on holidays. They were house sitting nearby and had 3 dogs with them. One was a Saluki and he was the same age as me and we ran and ran and ran.  The Oregan couple arrived in Australia in November and are staying until May. They kept saying how glad they were to have missed all the cold over their way. They even said the rain was nothing because it wasn’t cold rain.  COLD RAIN!!  What’s that?   I’ve never heard of hot rain. 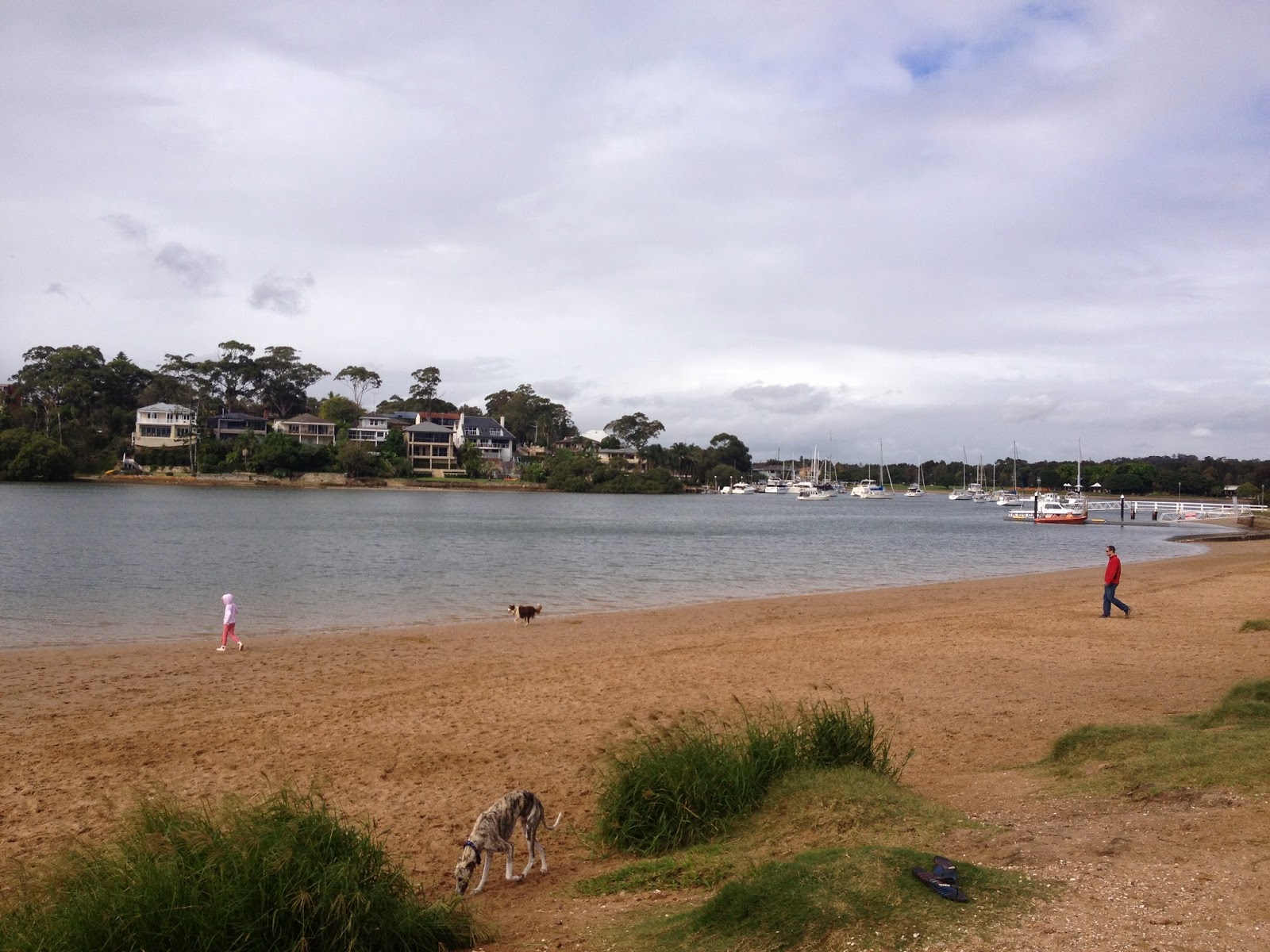 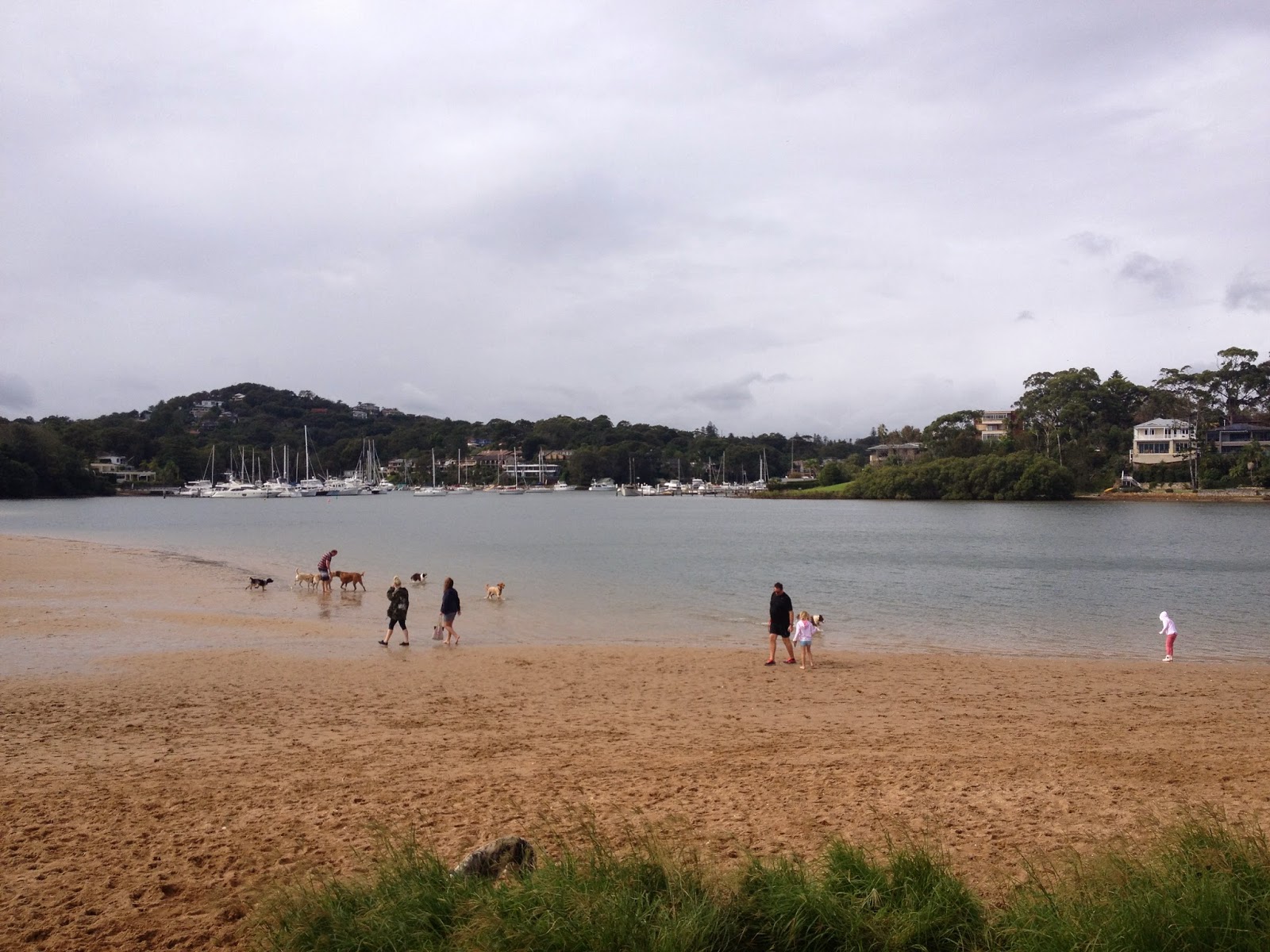 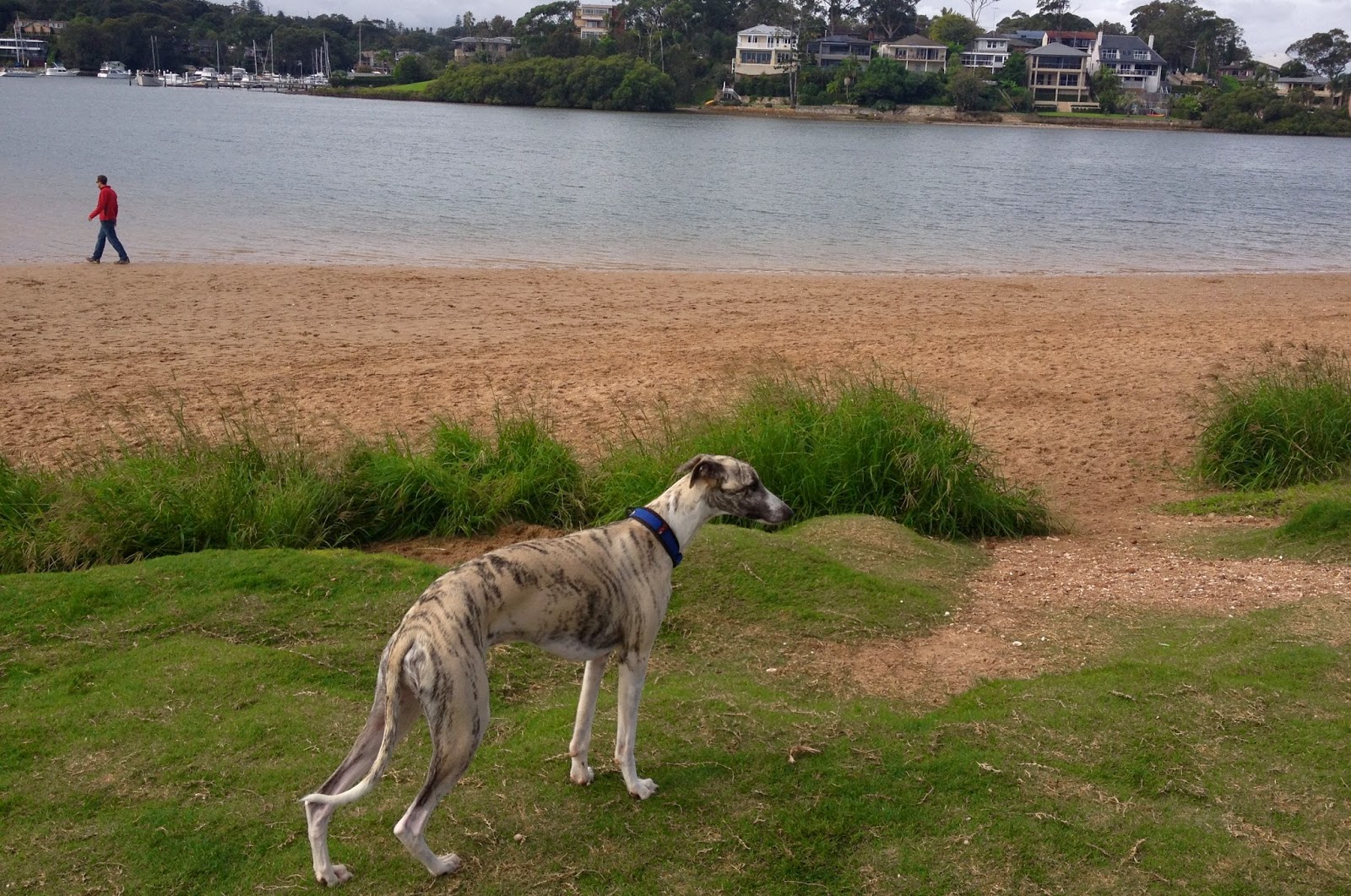 Mum and I went over to see my 95 year old Nan.  We are a bit worried about her. She is having a lot of trouble with her back and wasn’t looking at all well.  She looked VERY tired and just seemed to have lost a bit of the old spark. She doesn’t want to go anywhere anymore and would stay in bed all day if the staff at the home didn’t make her get up and get dressed.  That’s very unlike Nan.  It’s not that long ago that the staff had trouble keeping up with her.  She’s not supposed to go out alone as she is nearly blind but she used to sneak out and go off into town or go visiting friends ALL BY HERSELF. No-one knew how she was getting out but she’s VERY sneaky, my Nan.  Just like me, aye?? Too funny but not anymore.  Mum gets VERY depressed after visiting her.  It is sooooooo sad to see. I cheer Nan up though.  She really likes me,   but then,   I am VERY likeable.
Mum went to the Royal Easter show.  I couldn’t go!   NO DOGS ALLOWED  (unless competing)!!!!! Hmmmmmmmph!!  Not fair,  I say!  Anyway Mum had a good time.  She’s been to Sydney Royal every year of her life for as long as she can remember and that’s a very lot of years.  At least sixty eight million,  I think.   What’s Sydney Royal,  you ask?  It’s an Agricultural show.  Every year the bush comes to the city to show the cityfolk what they do and to show off all their produce and stuff and it is the BEST.  Not that I would know …. NO DOGS ALLOWED (unless competing)!!!!!! Hmmmmmmmph!!!!!
I had to go to doggy day care.  Now that was a bit of fun!! I met heaps of other pups and I had a good time but don’t tell Mum that. I CHEWED MY LEAD IN TWO when she left. How bad is that? When Mum first left,  the doggy day care lady tied me up to a hook thingoe, so she could do some paperwork,  and I CHEWED MY LEAD IN TWO!!!!!!  I showed her,  aye?????  Tie me up? Charlie?   Was she mad or something?  Some people have no brains,  aye??  Now I’ve got a brand new lead.  The doggy day care lady felt so bad for tying me up that she gave Mum a brand new lead.

Anyway back to Sydney Royal.   Harri and Lucy have been … lots …. They competed in flyball and agility and they competed many times at Sydney Royal.   It was always Mum’s ambition to compete in something at Sydney Royal and Harri and Lucy helped her achieve that ambition.  Me ….. I don’t know …. Mum thinks I’m a bit of a challenge but you never know I might just surprise her when I get a bit older.  Sydney Royal,  as well as being an agricultural show,   is also Australia’s biggest dog show.  You know …  a bit like Crufts and Westminster but not on such a huge scale.  We don’t have as many people as you blokes do but Sydney Royal is very big for our part of the world.  Mum loves it.  She goes EVERY year on the last day which is BEST IN SHOW day and sits for the whole day just watching the dogs.  My two legged sister,  Jane goes too.  They get there REAL early and sit in the same spot every year.  Funny but the people sitting around them are the same people EVERY year and they have become just like a family for that one day only.  One bloke,  a really lovely old Greek bloke,  shows up EVERY year and sits in front of Mum and Jane.  He has 6 daughters.  Only one of them (the youngest) sits and watches the dogs with him but the others all rock up at some stage or other during the day and stay a while. Mum and Jane have got to know them all.  There’s others too that they have got to know.  There’s one lady who is just the sweetest thing according to Mum.  She looks like a bird and she NEVER stops smiling.  Mum reckons she must be the happiest person in the whole world.  She reckons you just feel happy looking at her.  I’m sure Mum will tell you all about her BEST IN SHOW DAY in a few days time.   It’s this coming Monday and she’ll be there with bells on.  I think Mum and Jane would be devastated if one of their group of people fail to show up. They have such a good day.  Mum and Jane’s friends know they are always there and pop by to say hullo if passing as well.  A very social day!!
All you crafty Mum’s out there would LOVE Sydney Royal. There are craft competitions. I’ve told Mum she can put some pictures on my blog just this once. Just this once, mind you! Did I do good Zoe?   You've got to be firm with them, aye??  There’s cake decorating,  jam making, cake making,  photography,  painting competitions ….. oh there’s too many things to mention. There is one big glass stand in the middle of all the crafty things called The Standard of Excellence and the best of the best of everything gets displayed in there. Crikey Mum reckons there are soooo many beautiful things made by VERY clever people. 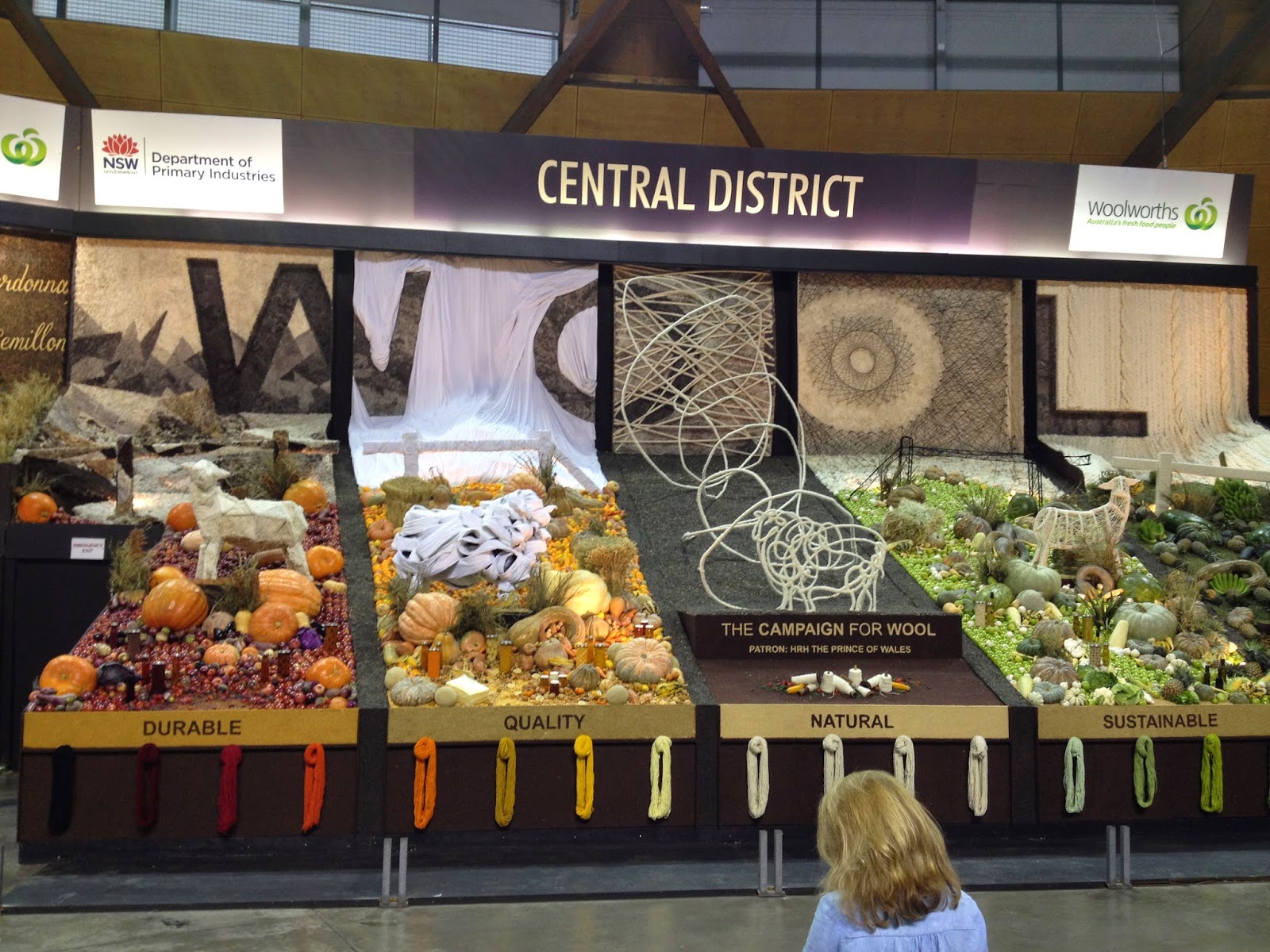 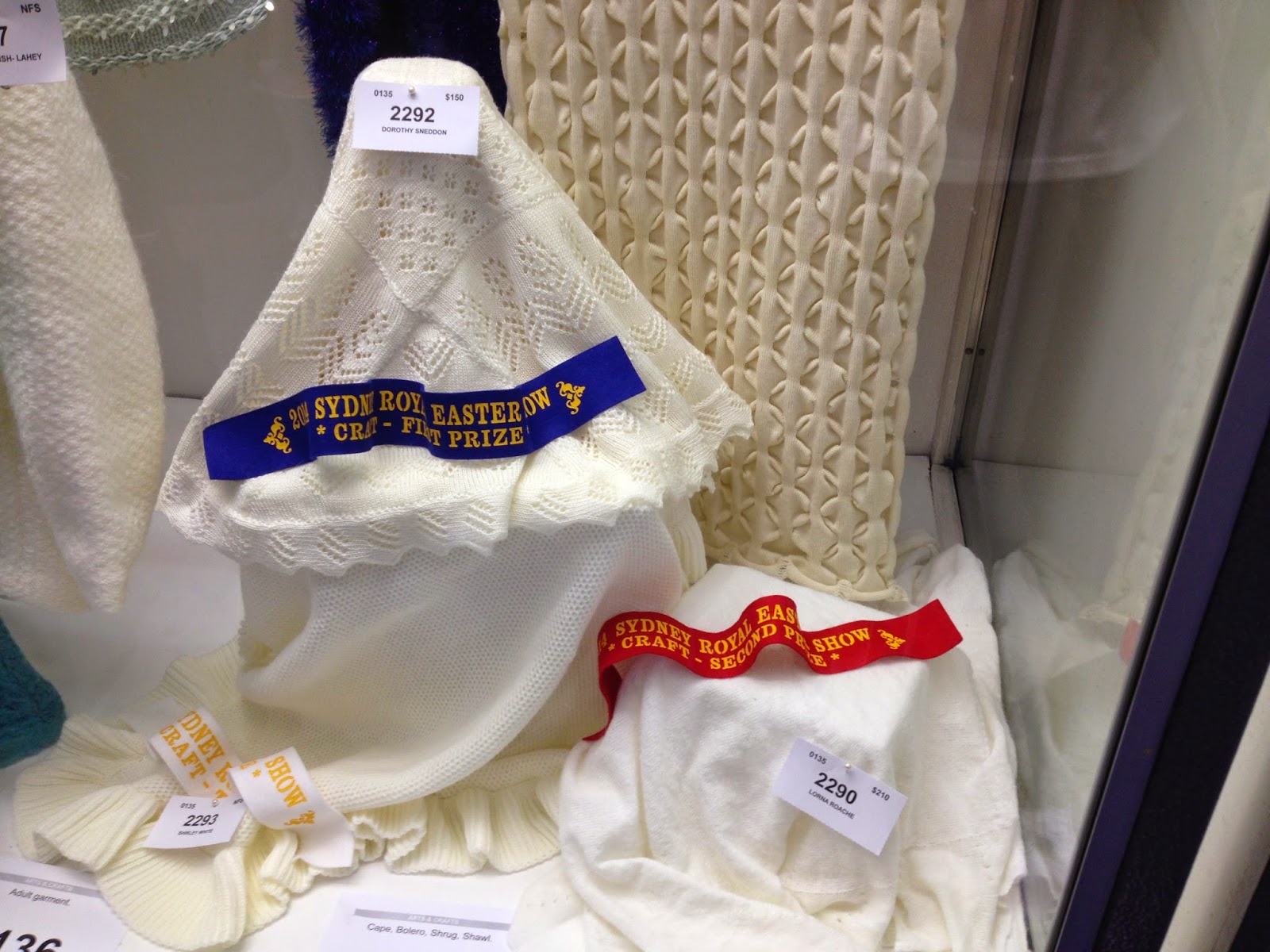 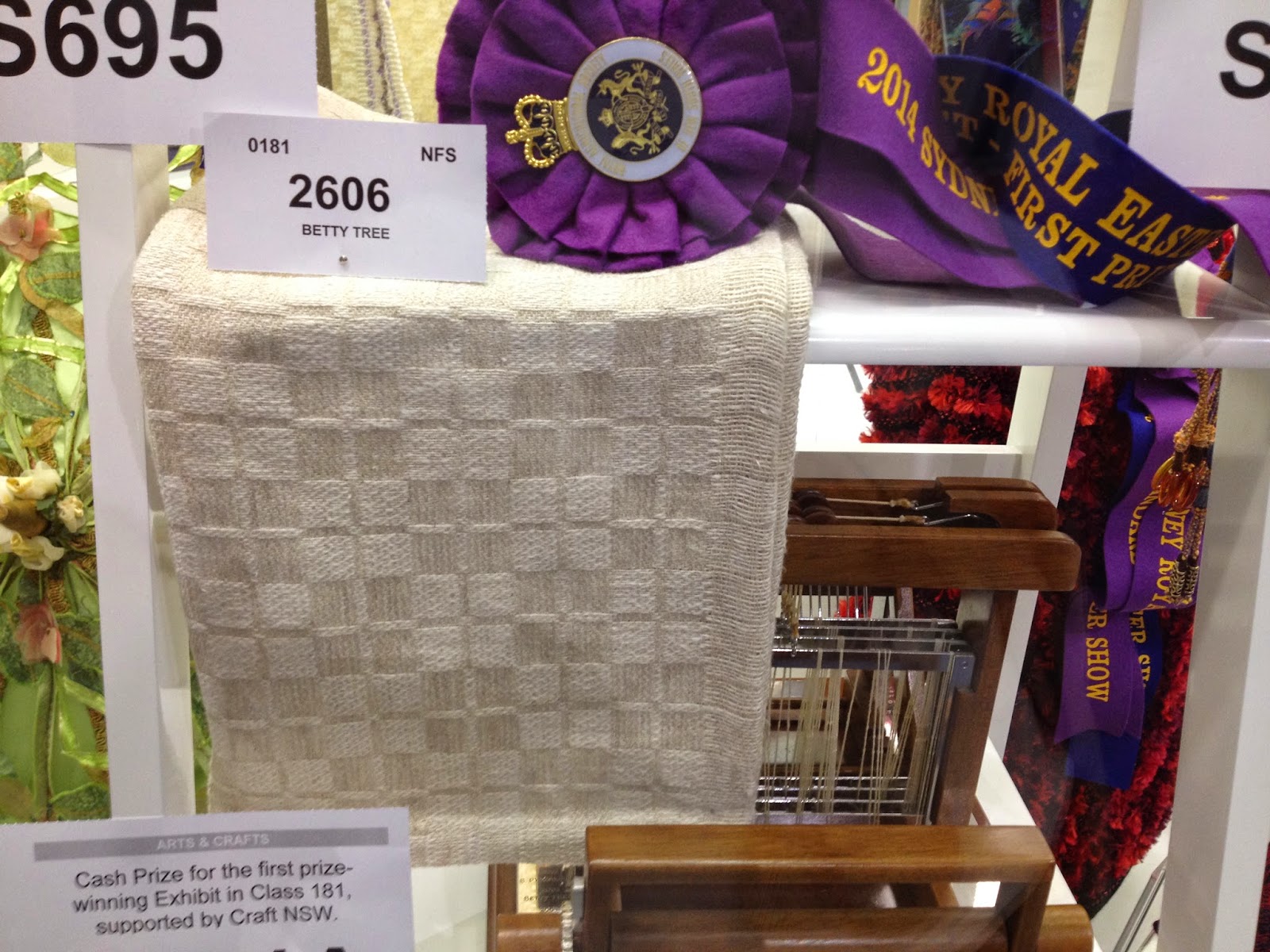 Mum gets all the other parts of the show out of the way before BEST IN SHOW DAY. She is going again tomorrow. Dad is looking after me this time.  We will have a BIG day!! We are staying in Leura in the mountains again.  You know … that cute little house with the hearts on the fence. Every time I look at those hearts I think of MY ENID! Crikey I miss her.  It’s good to be back in the mountains though! Tomorrow Prince William, Kate and baby Prince George are going to be visiting Leura and Dad and I are going to see them. I can’t wait. There will be lots of people but just maybe we will get a peek at them. I have a brand new bandanna collar and a MATCHING lead. It’s bright RED and I am going to look sooooooooo handsome. I’m sure Kate will notice me. She has quite a flair for fashion. 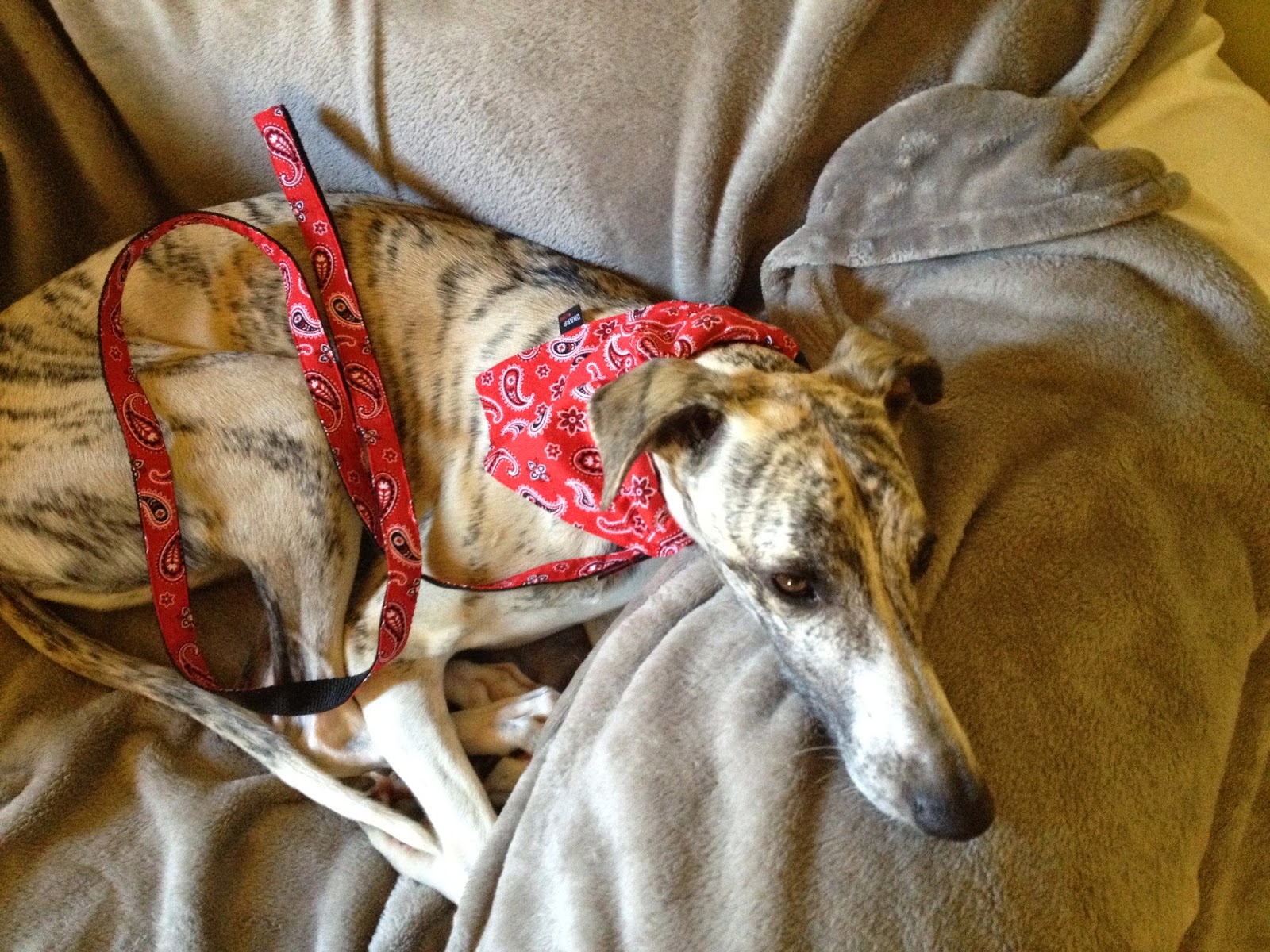 Well I’d best start getting ready. I do want to look my best just in case I get a right Royal pat. I’m going to ask Mum to give me a bath and a brush  and trim my nails. It’s not every day the Royals come to town.
Wanna run … Love, Charlie.
Posted by Charliedownunder at 21:25