Crikey so much has been happening I don’t know where to start. There’s so much I want to tell you about my holiday but I can’t get my Secretary to work.  I think she’s having too good a time but I’ve got her for a short while now so here’s what I remember ….


We had a good time in Narrandera. Saw a lot of bush poets and I got to have a few runs in the cricket park after the cricketers had gone home.
﻿﻿
Other than that there was not much excitement in town. It’s not very big. We left there and headed off to our next destination. Bright in Victoria. We travelled through lots of wheat and sheep country. The countryside looked as if it could do with a good drenching. I think there must be a lot of farmers around  praying for rain. Couldn’t take any pictures because again Dad was driving and there’s just no stopping him. We crossed over from NSW to Victoria and the countryside did improve a bit. Much greener. Now I don’t know if you blokes have the same trouble with your States that we do but there is a fair bit of rivalry between us. We Queenslanders call Victorians Mexicans. They call us cane toads and New South Welshmen are known as cockroaches. Western Australians are sandgropers and South Australians are just too weird for words. They don’t even sound like Australians. All very uppity and speak with a big plum in their mouths. South Australia was settled by free settlers so they think they are a bit better than all we convicts. I won’t tell you what we say about Taswegians. I don’t think it’s politically correct and it’s certainly not nice. Anyway we all think our State is the best state in Australia and of course we are right. Queensland is definitely the best. But right now I’m in Victoria and it looks pretty good to me except I don’t know how bright they are here in Bright. We have been for lots of walks around the place and if I hear one more time “My … that’s a magnificent looking creature” I’ll bite someone’s butt. Yes … they are referring to me!!!!!!! CREATURE!! Who are these blokes?????? Bloomin’ Mexicans!!!!!


Bright is just beautiful. Oh I forgot to say …. It’s in what’s known as “the high country” and very close to our Alpine areas. We don’t get much snow anywhere in Australia but we do get it and this is one of the areas in which we do. It doesn’t hang around for very long. We usually don’t get any until about mid to late June and it’s all gone early in September and it doesn’t ever get as cold as some of you blokes get it. Matter of fact we use machines to make snow. How weird is that?? It was freezing for me last night. We went out for dinner and sat outside in a beautiful garden setting and Mum didn’t take my coat. It was 14C and  I was soooooooooo cold. I was shivering from top to tail.  Mum and Dad had big thick jackets on and lucky for me Mum also had a jumper. She took it off and gave it to me. Crikey I love my Mum. S’pose you blokes think I’m a wuss but crikey 14C is a lot different to the 30C that I’m used to. S’pose14 is balmy to you.


Early this morning Mum and I went for a  big walk. We found the local dog park. Crikey what a great park. It was huge but there weren’t any dogs. Just me! I had a big run around all by myself. I don’t need anyone with me. I just love to run.

Found myself a pile of Roo poop!! Crikey that stuff is delicious!  We saw a couple of galahs and then headed off for a walk by the river.
It’s such a pretty river AND we saw a family of platypus having ever such a good time. You don’t get to see that every day! Platypus are VERY shy and you only see them early in the morning or late in the arvo. We didn’t take a photo as they wouldn’t show up in the water and as Mum won’t put pictures on here unless she’s taken them herself you’ll have to google them if you don’t know what they look like.  After our walk we headed back to our accommodation where Dad had prepared brekky for us. What a good Dad!!!!! We had a quiet morning at home. Dad isn’t real well so a quiet morning was just what he needed. He’s had an upper respiratory tract infection and is having trouble getting rid of it. After our quiet morning we headed off for a late lunch and another walk around the area. There’s lots of beautiful walks around Bright. I had the best time. Managed to find myself some mates down by the river and had a swim with them. Crikey that water was cold … Not like the ocean at home. Fresh water … who knew …. I’ve only ever swam in salt water before. 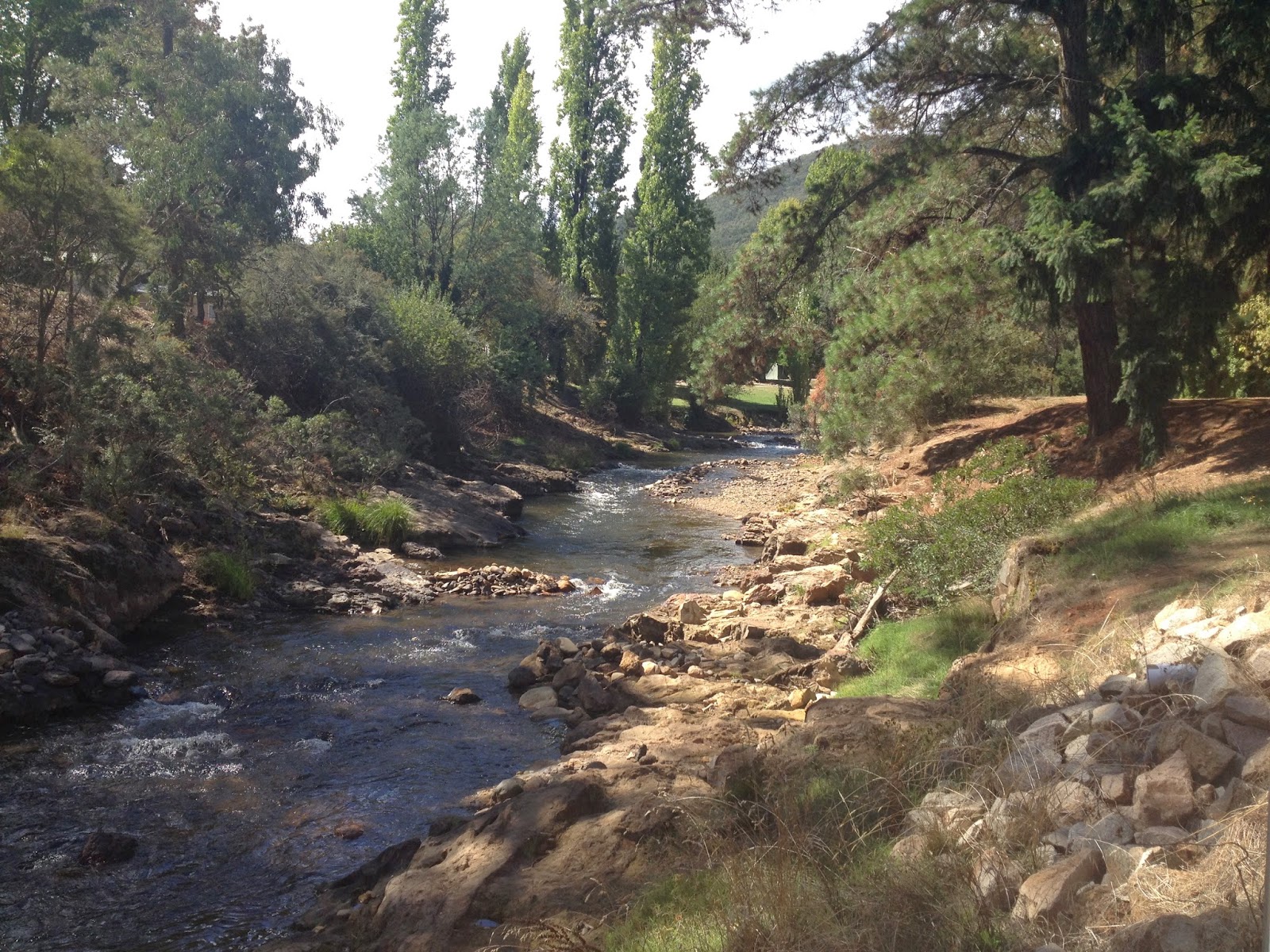 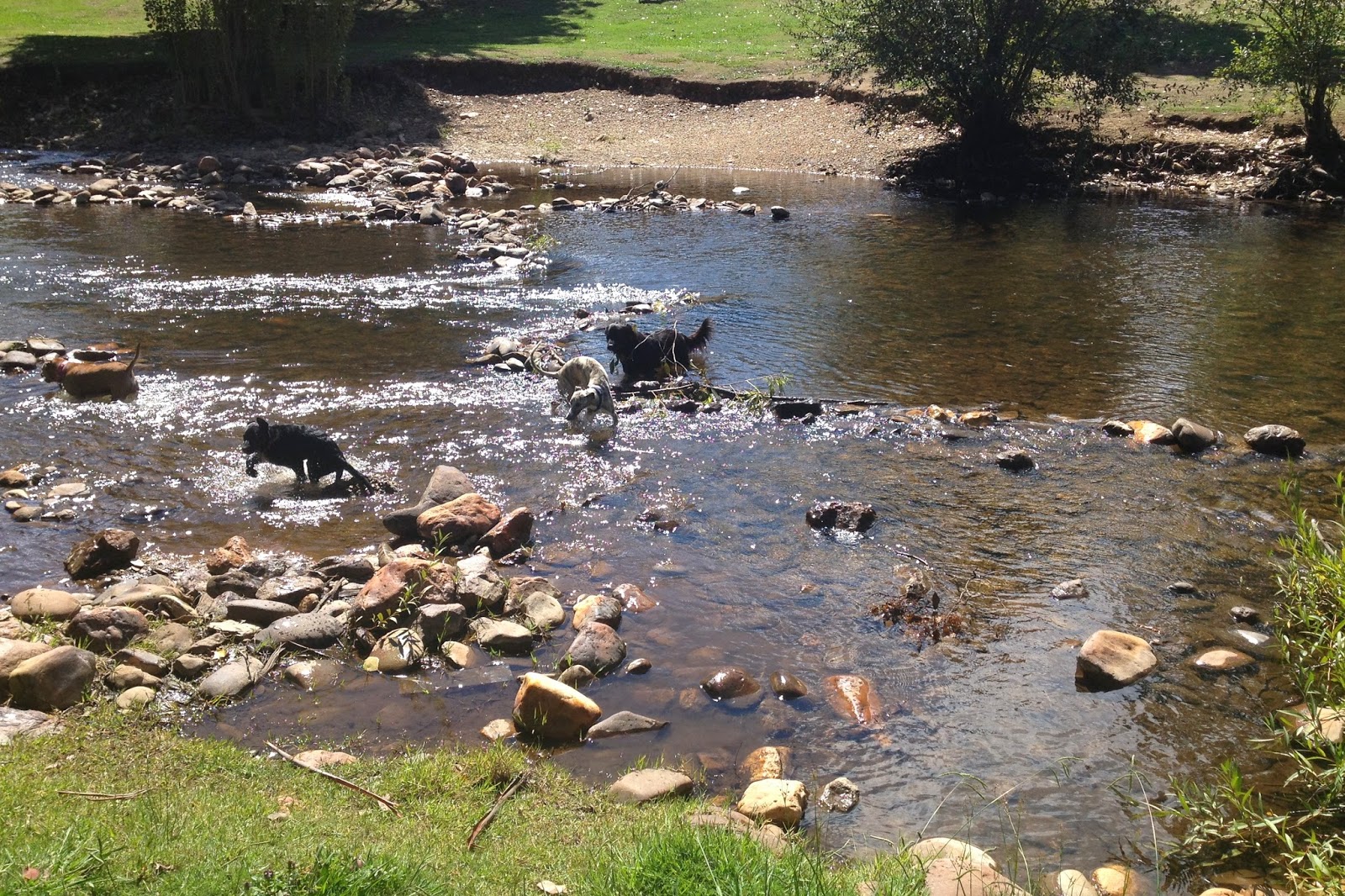 We headed back to our accommodation via the dog park and had a big run with a kelpie and a wire haired pointer.    Found my pile of Roo poop again and had another wee taste. Good stuff that Roo poop and I must say this town is real nice for a Victorian town. Only joking … we aren’t all that serious about our rivalry unless there is sport involved.  Sydney and Melbourne have a bit of a problem with which one of them has the best city. Everyone knows Sydney is best but Melbourne has a bit of a problem there. Other than that we all get on pretty good, aye?? One more day in beautiful Bright and then off to Beechworth. Still in Victoria but not the high country. It’s bushranger country. Home of Ned Kelly our most famous bushranger.  More later ….