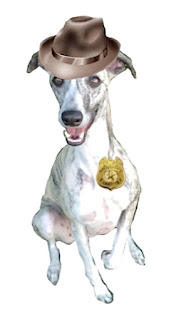 I take my role as Australian Detective very seriously and as such I must pass on to all my fellow Australians, especially Sydneysiders this VERY IMPORTANT MESSAGE!!!  Funnel Webs are on the march!!!!  These blokes are dangerous ....... AND deadly!!!!  They are marching all over the place at the moment. I need you to be very aware that they are out there. AND in there!!  They do go inside houses.  Dui and I will be doing all we can to keep you safe but you must keep your eyes open.  The main danger is to our humans as they are sloppy creatures and leave their clothes and shoes just anywhere.  These spider blokes just love to curl up in 'em and when a nice smelly foot is placed in one of those shoes or a piece of clothing is  put on ........ WHAMMO!! .... they attack and believe me, you don't want that to happen, aye??  So if you see your peeps clothes and shoes lying around bark 'em good.  The main danger for us blokes is our bed.  They have been known to crawl into our beds.  How the heck you're going to make your peeps shake your bed before you get into I have no idea but again I s'pose you just gotta bark 'em until they do or at least make 'em read this, aye?  Mum put a shirt on this morning and felt something crawling around inside it. She was sure it was a funnel web and her days were numbered.  She tried not to panic and removed the shirt VERY gingerly so as not to annoy whatever it was. A spider did drop to the ground.  Not a funnel web.  A little spider!!!  What a relief, aye?? 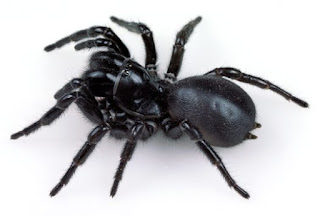 So please all Aussies ....... take care. For all the two leggers .... check your shoes before you put 'em on and shake your clothes and if you do come across one of these blokes ....... don't kill 'em. Put 'em in a jar, VERY CAREFULLY! There is an easy way to do it. You can check it out HERE!!  Looks easy, aye??  It is.   Mum's done it and she doesn't like spiders AT ALL!!  Then ..... you can take them to a drop off point and the authorities will send them off to a laboratory where the venom will be milked from the spiders and made into an anti-venom to save anyone that might be bitten.  Pretty neat, aye?? As for us four leggers ..... leave 'em alone, aye??  Leave 'em for the cats.  They deserve all they get with their hissin' and spittin' and smacky paw. Not you Madi. You're nice. So's Travis, Crockett and even the french tart and Pipo and Minko and all the Blogville pussy cats. Well maybe not Weinie the Queenie but I'm sure someone loves her. I don't think you have funnel webs over your way though, aye??  Ok ....... all you Aussies ...... you got it?????? ......... be careful!!!!!!!!!  It's important. 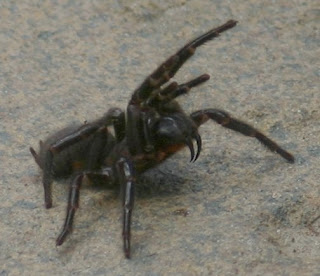