The horriblest day EVER!!! 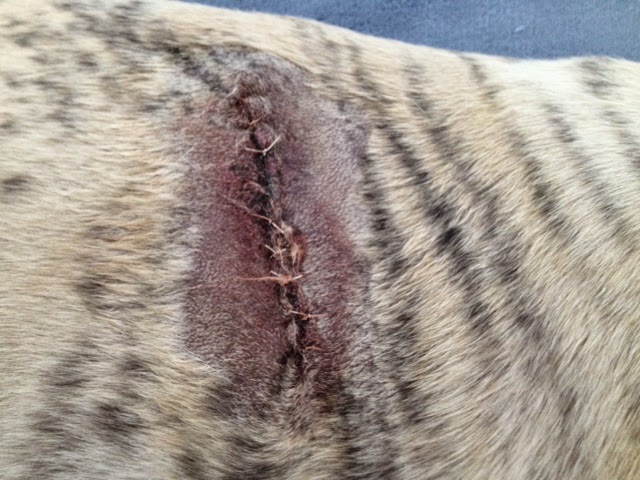 I'd like to be able to tell you that I was attacked by a great white shark while trying to protect my Mum or something but alas that's not how the story goes. No great white shark story for me. Just a great day at the beach ruined by a Moron with his equally moron dog.  Now I'm not blaming the dog!!  He's only a moran because that's what his moron owner taught him to be. It's the Moron himself that I blame. It all started like this.  Mum, Dad and I had been at the beach for a while. I was playing with my mates. Paddy, the Irish wolfhound was there. Paddy and I have the best times together. I think Paddy is my very bestest mate at the beach. Lots of my mates were there and Paddy and I were playing with them and we were all having a great time when we saw another dog coming. His owner was with him and he was on a lead. We had seen him earlier and had gone up to say g'day and his owner just kept walking and didn't say anything. He didn't ask Mum or Paddy's owner to keep us away he just kept walking so we just ran off.  Unfortunately for me, when we saw him again, we all ran up to him.  There were four of us and this time the dog just took a great lunge at us and he got ME big time, aye??   I ran back to Mum and Dad and I was screaming. Everyone on the beach knew I'd been hurt but do you know what that moron bloke did? Just kept walking as if nothing had happened. Mum was furious and after calming me down a bit she and Dad set off in pursuit of the moron and the VET.  They knew it was no use talking to the bloke but they did tell him that they felt his behaviour was inappropriate and were very disappointed to think that he didn't even stop to ask if I was ok. He denied his dog had done anything wrong and said he didn't so much as touch me before he lashed out with all sorts of very colourful, verbal abuse. Mum kept her cool but did tell him he was a moron before she and Dad walked away and took me to my mate Pete the VET. Crikey Pete's a good bloke. It was closing time but he and his nurse, Jackie, stayed back to operate on me. Pete said it was a very bad bite and if Mum and Dad had just left me to heal myself it would have become VERY badly infected and I would have been in an even worse state than I am now. I have a BIG problem with anesthetic too so Mum and Dad and Pete were very worried about me but hey ...... I survived and I am feeling a bit crook but it could have been a lot worse I guess. I had to stay at the hospital overnight but Mum and Dad came and picked me up real early this morning. There is no way I was going to eat or drink until they did. Jackie tried to get me to at least have a drink but NO WAY!!  Not until Mum arrived. Then I drank a bucketful. Crikey I was thirsty. I'm still a bit shaky on my feet. Mum was real worried and wouldn't let me down onto our lawn cause I was walkin' all funny like and she could just see me fallin' in the river.  Fair dinkum ....... what a horrible day, aye??  Me and my Sorry Ass have been sleeping most of the day. My good friend Goose http://gospelofgoose.blogspot.com.au/  gave me my Sorry Ass. He's my favourite stuffie.   He's real good to snuggle with when you feel a bit crook. 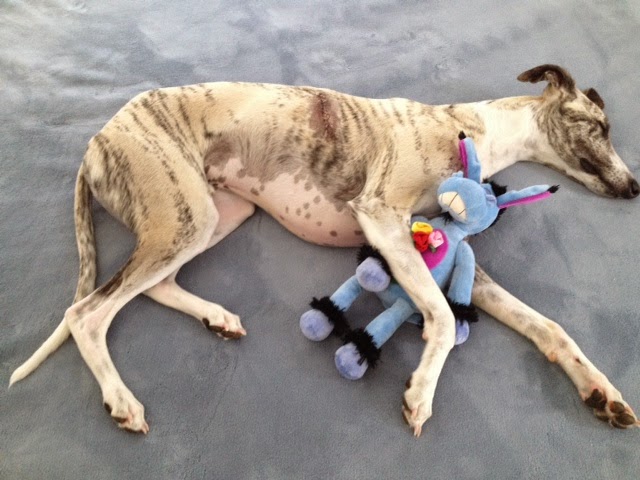 I don't think I'll be going to the beach for a while. We've been having a bit of a bad trot there lately, aye??  Pete says I'm going to be left with a bit of a scar and it's on my most photogenic side too. How bad is that?? Crikey ...... I hope my Enid  http://enid-aboutenid.blogspot.com.au/ will still love me.
AND my mate Bertie http://bouncingbertie.blogspot.com.au/ got into a bit of a tussle recently and he's got a scar too.We'll be able to compare our battle wounds, aye, Bertie??  Mum's just discovered the linky thing. She thinks she's so clever, aye??
Here's some more horrible stuff for the horriblest day ever. Our Jen got a phone call from Miss Jo's (the 6 year old Grandkid's) school to ask her to come to the school as Miss Jo had something in her eye and they had just called an ambulance as Jo was so distraught no-one could touch her. Oh No!!!  Another wounded soldier!!!  She's ok now. Once her Mum got there she calmed down enough that they could get whatever it was in her eye, out but she does have a bit of a sore eye still. Jo and I are sure going to look good for halloween, aye??  We won't even need to dress up. 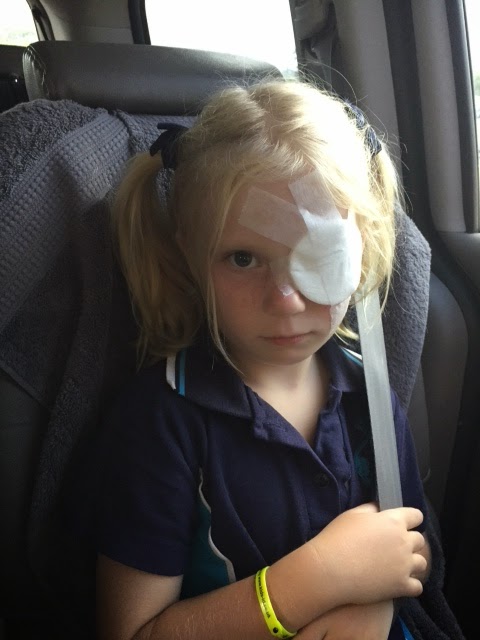