Crikey ..... he's arrived AND he's cute. Mum, Dad and I had to drive to Brisbane to the airport to pick him up. He came all the way from Melbourne in a plane.  Poor little mite. You'd have thought he'd be scared, aye??  Not him!!  He's going to be a tough little bloke I think.  Mum let him out of the crate and his little tail started to wag and the only time it stops is when he's asleep. He's a people dog. He loves people. He's not into me so much which is just the way I like it. He's ok but I'm top dog around here and that's the way it's going to stay.  When we got home he and I had a bit of a play around and then Dad took me to the beach while Mum took the little bloke over to meet his new family. She put him in a Santa's bright red pillowcase and tucked him, in it, under her arm. She'd arranged with our Jen to have the little girls all sitting quietly on the lounge when they arrived and Jen had told them Mum was coming with an early Christmas present and they had to be good.  Mum bowled in and placed the pillowslip with the puppy in it on Jo's lap.  She reckons the little girls eyes were as wide as saucers when they realised what was in the pillowcase.  The little bloke stuck his head out and the oooooohs and aaaaaahs started.  Crikey ..... everyone was so happy.  He's a great little bloke and settled in so well. Everyone loves him.  Hmmmmmmmph!  I'm a bit put out but even I have to say he's cute and he pretty much leaves me alone so it's not too bad.  He's back here today. Jen had to take the girls to the dentist so we have to puppysit.  Fair dinkum ..... Mum NEVER gets a break. She thought now that it was school holidays she'd be relieved of babysitting duties but no .... now she's got to puppysit.  Oh well ...... at least he's less demanding than the kids.
So without further ado I'll introduce you to Herbert Von Irving ..... Herbie for short!!  Crikey ...... that's a handle, aye?? 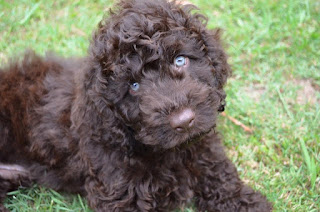