OMD!!!! I thought I was going to die this morning.

OMD!!  Was it ever cold this morning??? I thought I was going to freeze to DEATH!!  I saw something I've NEVER seen before.  We went for an early morning walk to the park. When we got there we were confronted with THIS:- 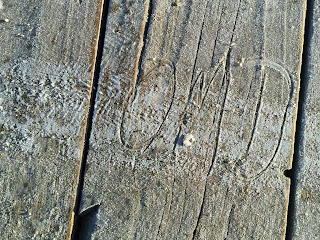 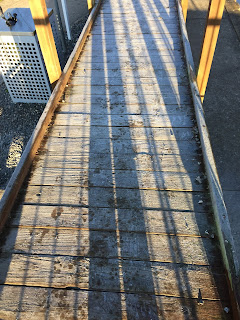 Yep .... the boardwalk was covered in ICE.  Lucky for Mum there was a lady in front of us or she would have fallen down and probably would have broken every bone in her ancient body. The poor lady didn't notice the ice and she slipped but she was young and managed to regain her footing before any damage was done. Mum would've just gone sliding right on down there if she got there first. Crikey it was cold.  There was another whippet at the park. His name was Cody and boy could he run.  He's a big bloke.  Mum thought I was a BIG whippet but Cody was much bigger than me. Mum reckons he was part greyhound but HIS Mum said he was all whippet. He sure could run fast but I managed to catch him after a while. He got tired quicker than me.

Mum reckons I'm a maniac now that I'm back to running.  I just don't wanna stop.  I've been running and running.  It sure is good to be back to normal.  The hole in my side is all better. There's still a big scabby thing on it and I have to wear my collar when no-one's watching me cause I'd chew it off but other than that everything is good.  Except the weather.  It's freezing.  It was 2C this morning. 2C ..... crikey I thought I was going to die.  Even for Sydney that's cold. I can't wait to get back home. It's never cold there.