Crikey ..... I don't know where to start. I have such a lot to say. Firstly ...... my Secretary is a slacko!!  She reckons she's busy with important stuff.  Hmmmmmmmph ...... since when has enjoying yourself been important??  We are on another road trip. At least, this time, they had the decency to take me along.  She reckons it's too hard to tend to my every whim when we are travelling around so I don't get to post, as much as I would like to, about all the stuff that's happening in my world. So here's just a little bit of whats happening with a lot of photos to fill in for the words.
I guess you all want to know how I'm going after the beach attack episode. Well ...... I'm good. That stinky old cone is gone, the stitches are out and I'm healing up pretty good.

The ICECREAM's stopped!!!!  S'pose there has to be a downside, aye?? I still look pretty crook but once the hair grows back I should be almost as good as new. Note to myself:  Charlie ...... stay away from DRONGO's!!
I'm back runnin'!!  OMD did I ever miss my runs and my mates. I'm not back at the beach yet because, as I said,  we are on a bit of a road trip. Dad's got some work to do in Sydney so Mum and I decided to come with him and have a bit of tripsying around when he is in between jobs. We went down to Beechworth in Victoria first off.  There was a Celtic festival on  so Mum and Dad got to soak up lots of Scottish dancing, Scottish bands with kilts and BAGPIPES and lots of Celtic music. They thoroughly enjoyed themselves. I was still a bit off while we were in Beechworth and wasn't up to running around so it was good for me to have something to take my mind off myself and besides there was a BEAUT icecream shop in Beechworth. I got lots of icecream. Doesn't get any better than that, aye??
From Beechworth we headed back to Yass where we spent a night and then on to The Blue Mountains again for 10 days. Our usual cottage at Leura was unavailable so we are staying in Katoomba in a beautiful old home with a beautiful garden and some really beautiful views from the front yard.


Crikey this country is a strange place. When we left home it was hot but that is to be expected in Spring in Noosa.  Beechworth was stifling!! It was over 40C one day and when we got to Katoomba it was 12C and we couldn't even see the sky. It was all misty and foggy and downright spooky.  It's supposed to be over 40C in Sydney tomorrow and in the high 30's here. Can you believe that? 12C tops one day and high 30's the next.  Weird place Australia. Crikey I hope everyone stays safe. I hope there aren't any bush fires. There was one here in Katoomba just a few weeks ago and one home was lost. The fire was started by a couple of drongos.  What's with these people?  They just can't help themselves, aye?? 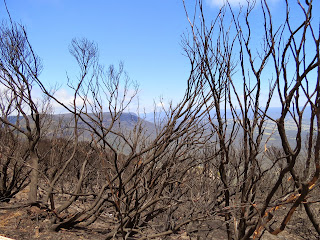 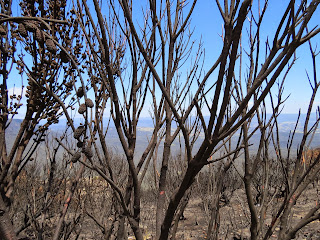 I still haven't told you about our Halloween night but I will get round to it. It wasn't a good night for me but the little girls enjoyed themselves. Crikey I haven't told you about Halloween and it's nearly Christmas.  So much to do ...... so little time.  Have you heard of ' The Melbourne Cup' over there. It's a horse race and a BIG DEAL here in Australia. Everyone and everything stops for it and everyone has a bet on the Melbourne cup even if they NEVER follow the horses at any other time. Mum always has $2 each way on a horse and this year she won.  The first time for about 30 years!! There were 2 German horses in the race and Mum decided to back one of them as she loves Germany so much and had just returned from there. Well ...... she WON!!!  Crikey ...... you should have seen her. She got a bit excited!!