I have to tell you that dear, dear, Morty Moo didn't make it.  He went peacefully during the night and we are all very sad. Murphy is the worst. Morty has been buried on the property and Murphy just wants to sit with him. If Jen locks him in the house yard he stands at the gate and whimpers and as soon as he is let out into the paddock he goes straight to Morty. He was the first one to find Morty when he was first sick. Jen and the girls were out and when they came home Murphy was beside himself. He kept running up to Jen and then running down into the paddock. Jen first thought he'd gone a bit crazy in his old age but finally realised that something must have been amiss. She followed him to discover Morty lying down in the taller grass at the back of the paddock and realised he was not well.  From that time on Murphy didn't leave Morty's side, unless he was led away, on lead, and locked in the house yard. He sure likes all his peeps and critters, aye??  Mum reckons he's the best dog in the world!  Hmmmmmmmmmmmmmph!!  How do all you blokes like them apples.  The best dog in the world ....... MURPHY!!!!!!!!  Crikey ......  I'm sure there's other contenders out there, aye??  But to get back to Morty.

I know you would all like to know what happened. Morty lost his real Mum when he was first born and he was a very frail and weak little bloke when Jen took him on. She raised him as best she knew how and he soon put on weight and looked a whole heap healthier but he was never very strong. Maggie, who Jen got at the same time grew faster and got stronger by the day but for Morty it was always a struggle. He did grow, however, and we all thought he was going to do well. But stinking old nature had to step in. Sorry Mother nature .... most times I like you but sometimes you just don't get it right, aye??  Why did you have to make paralysis ticks???  I s'pose you had a good reason at the time but ...... CRIKEY ..... it's 2016 now ...... couldn't you just find a way of getting rid of them.  Anyway you guessed it ..... dear Morty (who by the way I NEVER got to chase) got a paralysis tick.  In winter?????  Crikey ...... Mum doesn't even advantix ME in winter. Jen was told when she got the cows that they didn't need to be drenched for paralysis ticks as they were immune to them.  Well that theory flew out the window, aye??  The Vet said that normally this is true but calves pick up their immunity from their Mother's milk and poor Morty never got any of that.  Jen is feeling all sorts of guilt for not knowing this and feels she should have researched more before she got the babies.  Silly Jen ...... how was she to know??  She did ask the owner of Morty before she took him about ticks and he said there were no problem. She took his word for it. He's been breeding these cows for a long time. He should have known.  Jen wishes with all her heart she hadn't listened to the breeder but she did.  We keep telling her it wasn't her fault and it wasn't but she feels so bad.  She'll recover, however. We are all here for her.  She did all she could for Morty. She slept in the shed with him for his final few nights. That couldn't have been too pleasant.  It's winter here and although it's not freezing it does get awful cold at night. Especially away from the coast and that's where Jen is.  The little girls have coped well.  Having lots of animals around them has taught them all about life and death and they now accept these things a lot better than we do.  Jo felt it the most but she bounces back quick. Jen is devastated. She has wanted a cow ever since she was 3 years old. Mum and Dad took her on a trip to Lord Howe Island (one of the prettiest places on earth ..... you should google it ....... crikey it's beautiful) and there was a very tame cow there she called, Mr. Morrison. Jen would go every day and sit and talk to Mr. Morrison. She was so in love with that cow. From that day on she collected cows. Her room was covered in cow photos and cow memorabilia. It was easy buying presents for her. If it had anything to do with a cow she loved it.   She NEVER lost that love.  When she left school Mum and Dad took her to Germany. The cows over there are so tame because, in winter, they live in barns or in the cellars of the people's houses and are hand fed. Mum and Dad reckoned that trip was just all about cows.  They went from one paddock to another while Jen petted the cows. 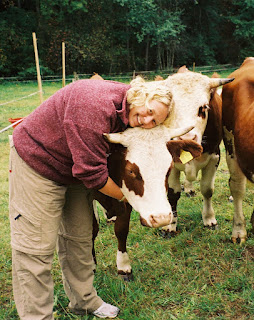 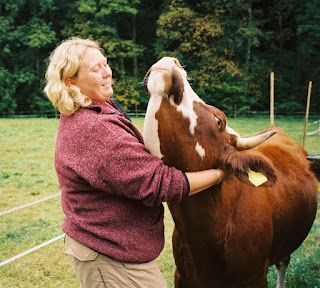 We were all delighted for her when she got Morty and Maggie.  Poor Jen, aye??  First off she felt she would have to sell Maggie. They are herd animals and wouldn't and couldn't be happy by themselves. She felt she wasn't a good enough Mum to own a cow but EVERYONE has convinced her otherwise and she has been offered another little Dexter  from another breeder (a friend of a friend), free of charge.  He has promised to tell her everything he knows about raising cattle and if I know Jen she will listen to every word and take it all on board. She doesn't make the same mistakes (if they can be called  mistakes) twice.
I did want to thank each and everyone of you for all the support you gave us.  It really helped Jen a LOT!!  She was in a very bad space for a while and your love helped her to get out of that place.  Thankyou, thankyou, thankyou!!
Run free, like a big boy, dear Morty ... AND grow strong, aye??  BECAUSE ...... when I get up there  I'm going to chase you from one end of that place to the other and back again.