Getting back to normal!

We are finally getting back to normal.  The cars unpacked, the washings done and put away, we've been to the beach and caught up with all my mates so now it's time to tell you about those last three hectic days of our trip.
We finished babysitting Remi and Millie and left Jane's house to stay by ourselves for a few days before heading home. Vivid Sydney was on and Mum and Dad really wanted to see it. They went about six years ago when it first started and it was a very BIG let down. Just a few building lit up and not very well at that but NOW .... OMD ..... talk about spectacular.The photos are not going to do it justice. Mum accidentally deleted them all.
Mum reckoned it was better than the fireworks on New Years Eve and believe me, on Sydney Harbour, the fireworks display is something to behold. I went too. We went on a ferry. Who knew dogs were allowed on ferries in Sydney??  Well not many people obviously because I think I was the only dog at Vivid.  We haven't been allowed on ferries for very long and the authorities do ask that we go in non-busy times but Mum and Dad really wanted to see Vivid with ME so off we went on one of the busiest nights of the year. No worries!!  No-one kicked me off the ferry and I was ever so good. Matter of fact ..... I was a BIG hit with everyone. 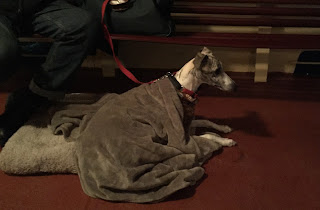 Crikey the ferry ride was good but once we got off I was a bit overwhelmed to say the least.  I've NEVER seen so many people in one place before. They were like ants.  Mum hates crowds but she was so engrossed with all the lights she walked around with her mouth open in awe for an hour before she realised she was surrounded by people.

I must say the light show was very impressive but after an hour of all those people I was well and truly over it.  Thank goodness so was Mum and Dad and we headed back to the ferry for a very quiet, yet colourful, trip home. The ferry trip was the best part. You could see all the lights on the buildings, bridge and opera house from the water and it was ever so pretty and more importantly ...... peaceful!!!!!  It was a good night and Mum and Dad were sooooooo proud of me.  They said my behaviour was impeccable, whatever that means.
The next night one of Mum and Dad's favourite groups was playing at a folk club in one of the suburbs of Sydney so off we went.  I thought I was going to have to stay in the car while they went and enjoyed themselves but ...... NO!!!!  surprise, surprise ..... I was allowed in.  It was just a tiny venue. Only fifty people and 1 Whippet. How good was that??  I sat in the front row and, again, I was a big hit and EVER SO GOOD!!!!!!!  The group playing was called the Wheeze and Suck Band and they are a group of older Pommie blokes, now living in Australia and they perform old Pommie songs. They are good too. A bit noisy for my ears but there was no amplification, like at some of the festivals we go to, so it wasn't too bad. The name of the folk club was The Loaded Dog so I was right at home.  I had to perform too.  After the concert EVERYONE wanted to take my photo.  Oh well .... it wasn't too bad ..... I got lots of treats.
We headed for home the next day. We always stay overnight at the same B and B in Coffs Harbour. The owners of the B and B and Mum and Dad have become very good friends over the years and the last few times we have stayed there we have all had dinner together. They've got a dog called Jack and we get on great too. We laid in front of the open fire (OMD is that ever a luxury ..... we don't have THAT at our house cause it's never that cold).


We provided the drinks. They cooked the meal. Only problem was we were all enjoying ourselves so much that time slipped away and it ended up a very late night indeed which made it VERY hard to leave early the next morning. BUT leave we did. It was a very tiring trip home. We left at 7am and didn't get home till 5pm. We didn't unpack the car.  We had stopped at the shops to get some groceries. We got those out of the car and we had a quick dinner and we were in bed by 8pm.  I felt as if I could sleep for a week but I was up ready and raring to go early the next morning.  Guess where we went first up.  Yep ...... the beach.  Crikey it's good to get back to normal.